There’s a big storm brewing in the French Alps… we have had a bit of a lull today, but the snow will start again tomorrow morning, with winds building to 80-120 km/h at altitude. An aditional 30-50 cm of snow is forecast with the snow line between 300m and 1000m. The avalanche risk is likely to increase to 5, with snow continuing through Saturday morning, giving up to 15cm more snow, before winds drop and skies clear in the afternoon.

Hopes of snow towards the end of this week are fading fast. The outlook from the last ensembles show a much-reduced level of precipitation than hoped for, but we remain optimistic in the outlook for next week. 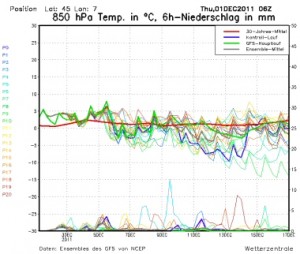 Temperatures have fallen, and the resorts are busy making snow, but this has only been enough for an extremely limited opening in Courchevel this weekend, while Méribel have delayed opening altogether. The wiggles do show a strong possibility of temperatues continuing to fall, along with some possible precipitation, but the season is starting with a wimper.

Could the snow arrive towards the end of the week? The ensembles are still showing good possibility of snow from Friday, Méteo France and other sources seem to agree. We expect the resorts to confirm over the next couple of days whether they will open this weekend, and we are hearing rumours that Les Menuires have delayed opening to 10th December. We will try to get confirmation…..

While Méteo France have been forecasting snow from next week, there is no feeling of any imminent change at the moment. Today’s wigglies are looking less promising than they were a few days ago, but of course these will remain very changeable further than a few days out. 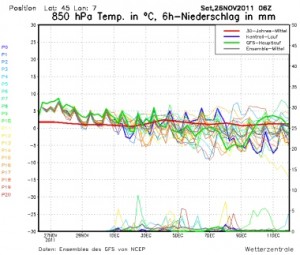 Snow canons were operating in Mottaret today, and Val Thorens is now open, but skiing is almost exclusively on artifical snow. We are holding our collective breaths!

Well, Val Thorens opened today, and we (half) expect Méribel and Courchevel to open in nine days time. But the season is starting where last season left off. ValTho webcams show a handful of skiers braving the bright sunshine, and thin, artificial snow cover. The canons elsewhere have produced dotted threads of snow on a few runs, ready to be coaxed into shape in 10 days time.

This picture shows the Saulire, taken in mid-April this year. Sadly, current conditions are not looking this good today. The 2010/11 season started well; a good dump of snow in October (shin-deep skiing on Truit, between Mottaret and Méribel) was following by a long, cold spell. Opening weekend was bitterly cold, but with very good snow. However, there were no significant snowfalls after Christmas, and the season was effectively coming to end end by late March. The only reason it lasted this long, was due to very cold temperatures in January and February.

Amongst locals, talk is of a severe winter. Village elders have been predicting a good season since the summer, with tales of genepi plants being taller than average and various other portents, but we have seen no sign of significant snowfall yet, and the temperatures remain unseasonably warm.

The good news is that Méteo France are predicting heavy snowfalls next week, with a cold front heading across the Atlantic from Canada, and other forecasts and weather prediction models that we’ve seen tend to agree.

While this mornings ensembles continue to show promise for precipitation in early December, the previously forecast drop in temperatures is now looking less likely. 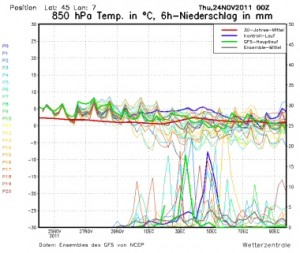 With Val Thorens opening today, and Courchevel and Méribel only 9 days behind, it seems certain that the first turns will be on artificial snow. Let’s hope for a top-up of the real stuff on the opening weekend.

We will be keeping a close eye on the weather and forecasts over the next few weeks in the lead-up to the opening of the resorts. Another crisp and clear day in the Savoie today, but the ensembles are still looking promising for some snow in early November. 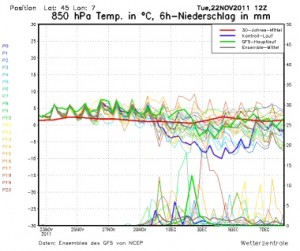 This shows a likely sharp drop in temperatures from around 1st December, along with a reasonable chance of precipitation from 30th November. Powder for the Méribel opening weekend?

Having made you all excited, now take a look at our weather outlook from 20th November, and notice how much the wigglies have changed. A lot can happen in the next 10 days….

Today’s wigglies show the possibility of snow around 3rd December, coinciding nicely with the Méribel opening weekend. Although two weeks is far too long for any accurate forecast, we can keep our fingers crossed! 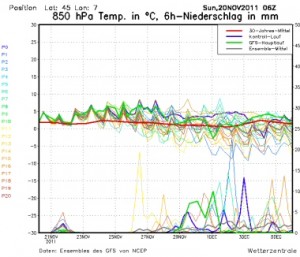